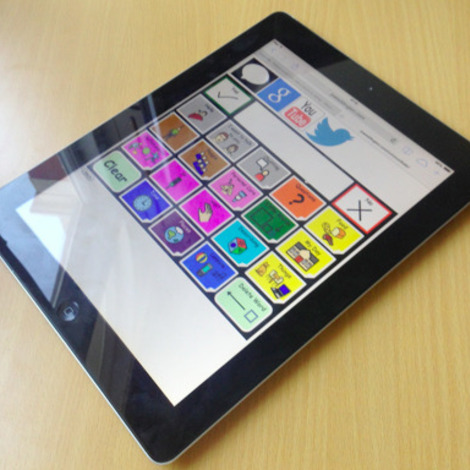 My little brother Richard has never been able to speak. Until he was 19, my family managed to communicate with him on fewer than 100 signs. At 19 he received a Voice Output Communication Aid (VOCA) like the one used by Stephen Hawking. Richard's VOCA has a simple set of folders and icons. If you press the folder for animal, and then press the picture of the dog, the VOCA will say "dog".

Now Richard can use hundreds of words and it's not just me, mum and dad who can understand: it's everybody.

The VOCA changed his life. But he's not alone.

Approximately 32,000 people in the UK require VOCA but only 8,900 (28%) can access one (http://goo.gl/8OQuTr). This leaves 21,000 people without a voice. The main barrier is that VOCA cost an average of £2000 (http://goo.gl/3KlLcP), which is unaffordable for families already stretched by more immediate disability needs.

I believe that 21,000 people in the UK alone who can't explain illness to a doctor, choose dinner, or tell their family they love them is 21,000 too many.

In 2014, Occupational Therapist Kate McCallum and I developed CommuniKate, the first completely free, web accessible VOCA. This allows anyone with an internet-ready device to communicate by providing a free alternative to expensive VOCA. CommuniKate is released under a GNU General Public License, the pagesets are released under Creative Commons and we only use free icon sets. These licenses encourage others to remix, tweak and build upon the work and make communication a reality for everyone worldwide.

CommuniKate was launched in November 2014 and has been accessed by users from 20 countries to date. Initial feedback has been overwhelmingly positive. Currently volunteer teams are translating it into Spanish, French, Swedish, Portuguese, Arabic, and Urdu.

In 2015, I will continue to develop CommuniKate through volunteer contributions, organise training sessions for speech therapists and VOCA users, and improve the quality of the speech output.