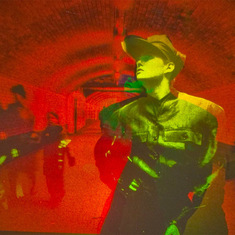 I studied holography at the Royal College of Art and was an Artist in Residence at the Museum of Holography on Mercer St, New York. I then became a professional photographer for many years working in London. Recently, I decided to get back into holography because I found myself in a position where I could make them again and I feel they are due for a revival. There is a great renaissance for all things analogue and I really want to make tangible art again.

Returning to holography after a break of 15 years or so, the world has changed a little and photography and holography have changed a lot. I have spent the last year building a studio in Wales, and now want to develop my ideas in the form of iPhone originated stereograms.

A stereogram is a kind of synthesised hologram that originates in film or video footage. It can display time and motion as well as 3D. I like them because they can be spontaneous, unlike regular types of hologram, and can display emotion and have a kind of nickelodeon type nostalgia about them. It used to take a lot of time to create these, but now with an iPhone I can use various apps that get rid of the camera shake and smooth out the animation, which speeds up the process considerably.

Now I have built my studio, I need to take it up to the next level to make my stereograms. I am going focus on research and development to work out how to use an LCD screen in a holographic set up. I also need to automate the whole stereogram making process with the help of a moving slit (to make the separate exposures) and a Raspberry Pi or two.