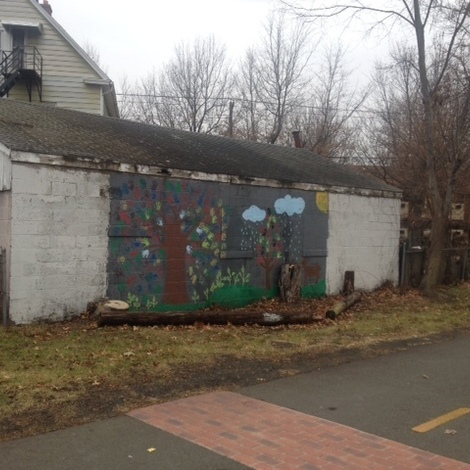 Cities all over the world are discovering how community mural projects can transform neighborhoods. In some cases, large murals have been credited with decreasing local crime and increasing feelings of security and hope amongst residents. As an Americorps VISTA member serving in New Haven, I believe that the city's under-served neighborhoods could be positively impacted by a collaborative mural project. Two sites have been identified as prime locations for a collaborative mural project in New Haven: the first site is a wall along the Farmington Canal Greenway in the Newhallville section of New Haven, and the second is the side of the Christian Community Action Agency (CCAA) building on Sylvan Street in The Hill neighborhood.
Local New Haven artist Kwadwo Adae has agreed to lead the painting portion of the project. A New Haven native and a successful entrepreneur, Mr. Adae is the founder and director of the Adae Fine Arts on Chapel Street. Mr. Adae is deeply committed to community values and is excited to collaborate with local residents on selecting a design as well as the actual painting of the murals.

The two artworks created by the Community Murals Project would be highly valuable and useful to residents of the surrounding communities. The Farmington Canal Greenway mural would be a welcoming symbol to pedestrians who utilize the Greenway’s lanes for running, cycling, or walking with friends. The mural would celebrate this unique landmark and enhance the feeling of safety and positivity while pursuing healthy lifestyle habits.

The CCAG building is a landmark of its own, as a long-standing community institution that provides emergency shelter, transitional housing, food, and educational opportunities for low-income families, specifically targeting families who are homeless or at risk of becoming homeless. CCAG’s motto is: “Help, Housing, Hope”, and we wish to celebrate this theme with a giant 3-story mural on the west-facing side of their building.