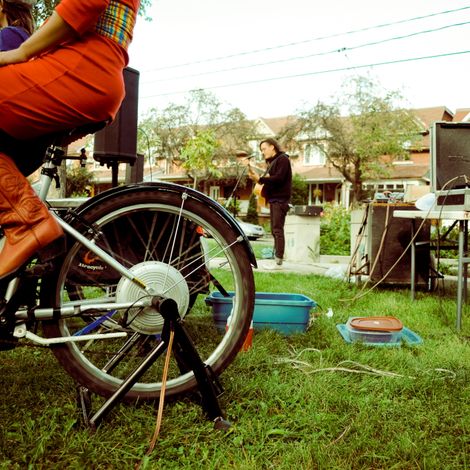 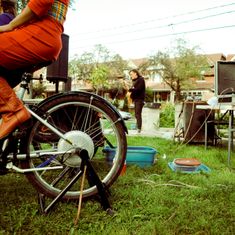 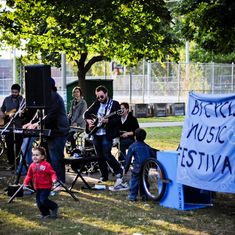 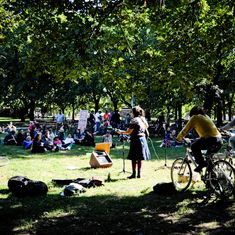 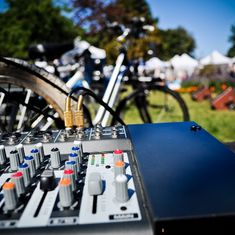 This is the third year I've run the Bicycle Music Festival, a pedal-powered, mobile music festival. It's a free community event involving a series of outdoor concerts and performances on Sept. 15, all powered by bicycles! The P.A. for the event runs off of bike generators pedaled by the audience and all gear and instruments are moved between our park venues on cargo bikes and bike trailers by an awesome team of volunteer roadies. We ride as a group from one venue to the next and even have live performances along the way!
The festival features independent musicians from a variety of genres performing in beautiful park settings to diverse audiences. Families make up a big part of the crowd and you can usually find at least half a dozen kids dancing in front of the stage.
One of the best parts of the event is that it brings together people who you wouldn't normally find at a music festival. Our accessible and innovative format draws in almost as many passers-by as folks who had planned to attend. What could be more quintessentially Toronto than a taxi driver parking his cab to listen to electro-pop in a park?
The festival has grown each year and we're determined to make it even bigger and better this year. I recently attended the San Francisco Bicycle Music Festival, which is powered by 20 bikes and features a 4' by 8' mobile stage, and I've returned with the inspiration to take our festival to the next level. There's a huge buzz in this city about all things bike-related and ever-growing interest in powering events by bike. Our festival has captured many imaginations and is poised to be the catalyst for a bike-powered revolution in Toronto.
Here are some other things we're dreaming of: Imagine a group of bankers stumbling upon a bike-powered square dance on Bay Street, or politicians leaving Queens' Park and encountering a pedal-powered burlesque show! Bike-powered events allow access to unconventional venues and hold the promise of shaking things up all over the city!