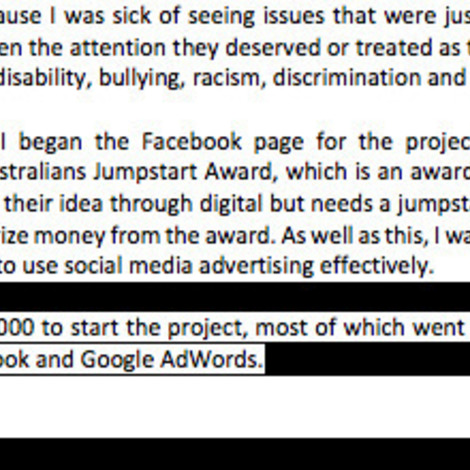 The Aware Project is a social media platform for awareness and dialogue on issues that are negatively impacting young Australians. The way that we generate our content is through young people submitting personal stories about their experiences with these issues to the Aware Project, and also by interviewing influential Australian figures about what they think needs to change in our society.

I started the project while living in Alice Springs last year in my gap year with the help of two other friends. The reason I started the project was because I was sick of seeing issues that were obviously happening in Australian society not given the attention they deserved or treated as taboo topics. These issues include mental health illness, disability, bullying, racism, discrimination, gender and sexuality.

In September last year I began the Facebook page for the project and a week later it won the Foundation for Young Australians Jumpstart Award, (an award for a young person who has the potential to scale their idea through digital but needs a jumpstart), I created a website for the project with two of my close friends who also wanted to impact these issues by increasing awareness about them. Since then the Aware Project has gone on to publish 20 stories and 15 interviews, all gaining substantial traction and views, and we are adamant on continuing to share these important stories and interviews.

At the start of this year, however, my two friends (and co-founders of the Aware Project) moved to Melbourne and I moved to Adelaide. While this hasn't stopped the work we have done, it's definitely been a bit of a roadblock because we only have one camera and one microphone between us which is used in Melbourne whenever we do interviews there. This means that I've had to film interviews on my phone whenever I want to do interviews in Adelaide, and means that the quality of these important interviews we do aren't as good as they can be.