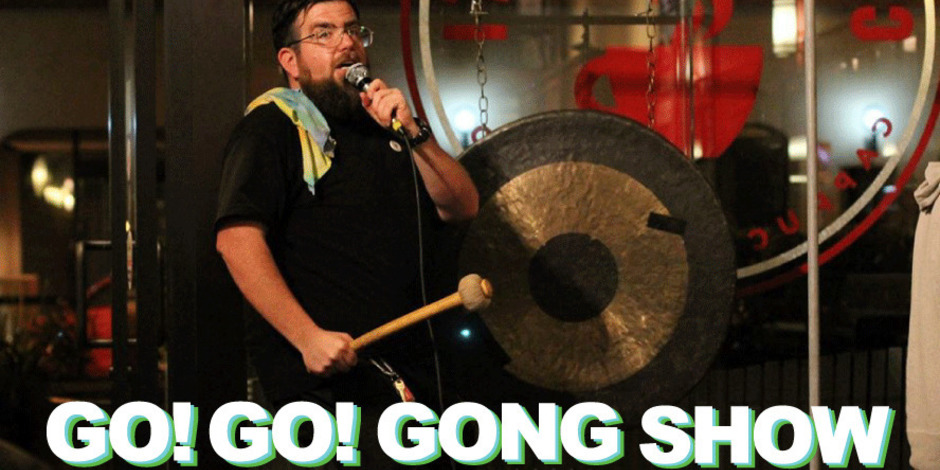 I always wanted to experiment with a talent show, but I wanted it to be wacky and in-your-face. So went back to the 70's...

Anyone and everyone gets FOUR minutes to compete using whatever entertaining talent or skill they have. The winner takes home $50 in quarters in a sock, a Certificate of Awesome, bragging rights, and San José’s undying gratitude!

FORMAT & GUIDELINES
• Sign up in person on the day of the show by 9:00pm.
• Three “CELEBRITY” JUDGES will be selected by the host prior to the show. The judges will be allowed to make comments and impose bias upon any of the performers they wish. They are the only people allowed to use the GONG per show and may use it any time they wish during an act’s performance.
• If the act is not entertaining, the audience is encouraged to chant 'Go! Go! Go! Go!' until the performer leaves or a judge hits the gong.
• All ACTS get a MINIMUM of ONE (1) minute and UP TO FOUR (4) minutes to perform. All performers WILL get cut off at 4 minutes by the host.
• Performers will be introduced by the host. Host will start the timer and announce: “Your time starts now.” Upon the four minute mark, the host will make a noise and return to the microphone to thank the act and:
• IF THE ACT IS GONGED BEFORE THEY HAVE COMPLETED THEIR PERFORMANCE, THEY ARE DISQUALIFIED FROM THE COMPETITION.
• If the act completes their performance, then they will receive three scores from 1 to 10.
• The act with the highest score at the end of the show wins.
• If there is a TIE, the audience will choose the winner by applause, or decide if they should split the prize.
• The winner will receive $50 in change and a slot in the FINALS to be announced later this year.
• The host is in charge and can allow and veto anything they wish regarding the rules and format.