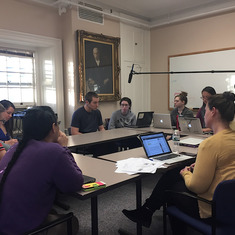 While all homeless populations are vulnerable, young adults are especially at risk. Service providers report that many unaccompanied homeless youth feel safer sleeping outside or in abandoned buildings than in adult shelters where they are at high risk for exploitation, exposure to harmful substances and diseases, robbery, and physical injury.

Y2Y (Young Adults Uniting to End Homelessness) is embarking on a bold experiment that will begin with the creation of a student-led, young-adult homeless shelter in Cambridge, Massachusetts, staffed by hundreds of volunteer Harvard students. In year two, Y2Y’s effort in Cambridge will be replicated by a university in another city where a large number of homeless youth are at risk. And in year three, a third young-adult homeless shelter will be launched by a third university, all with the help of Y2Y, based here in MA.

Blueberry Hill Productions has exclusive access to document Y2Y’s triumphs and obstacles over the next three years. The main characters in the story are compelling and thoughtful, the interaction of homeless young adults and idealistic university students is inherently charged, the challenges they will face together are huge, and the translation of the Y2Y model from Cambridge MA to other cities across the country is totally unpredictable.

The documentary film Y2Y: A Bold Experiment (working title) will be dramatic. It will be beautifully shot (by DP Austin DeBesche), and directed (by Laurie Kahn) with a skilled eye. The filmmaking team will have the same respectful approach for which Laurie Kahn’s other films are well-known. Most importantly, the film will amplify the impact of Y2Y’s work. The film will be a tool for change, potentially inspiring dozens of universities in the US and abroad to create and operate peer-to-peer homeless shelters for young adults.

Funded by Awesome Without Borders (April 2016)