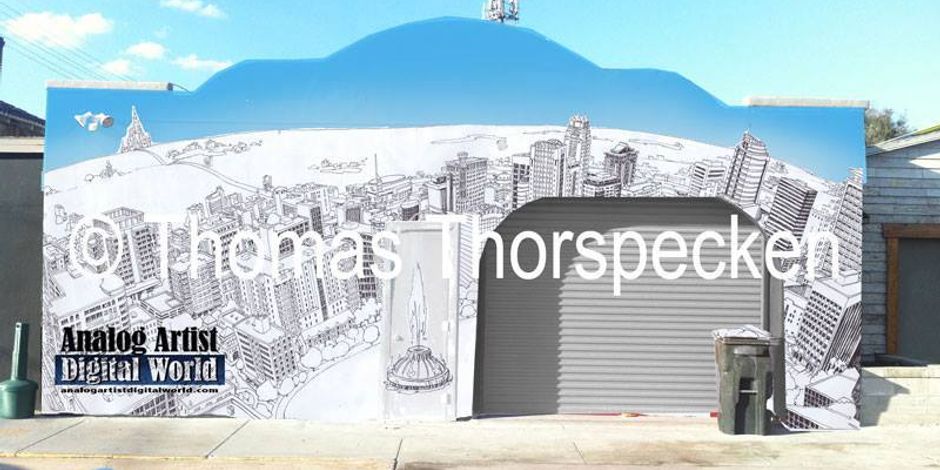 Orlando Fringe and Ivanhoe Village share more than just office space, they share a commitment to building a better community. We believe that the mural, proposed by renowned artist, Thomas Thorspecken reflects artwork that celebrates Orlando. We also believe that this artwork will be a "destination mural", bringing traffic into the neighborhood to discover both Orlando Fringe and Ivanhoe Village.

The offices were painted a stale, black color. WE approached our landlord, Jane Webster from R-Kid Properties and she is invested fully in the project, having her maintenance team pressure wash and paint the building a light yellow in order to make the mural work stand out and save the organizations from having to invest in the time and labor of the prep-work.

We think that the mural is reflective of the "City Beautiful" that we all live in and share. Iconic figures such as the SunTrust building, the fountains at Lake Eola and even our friends at Cinderella's Castle are prominently displayed in the artwork. The mural is family friendly and is a fine example of why Thomas Thorspecken has won numerous awards for his work.

While there are several mural projects in and around Orlando, so many of them, we feel are similar or done by a handful of the same artists. This one is unique and very uncharacteristic of Mr. Thorspecken' s work, which is one of the reasons we adore it.

Ivanhoe Village is home to Orlando's most well known cultural entities and Orlando Fringe is known as Orlando's most unique cultural event. We think this mural adds to the uniqueness and awesomeness of our neighborhood.