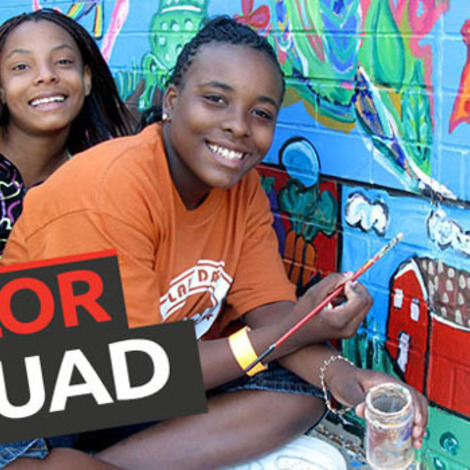 Creative Action’s Color Squad, in collaboration with mural artist Nate Nordstrom, will be renovating of the four-sided “Don’t Drink And Drive” mural, originally by artist Al “S.K.A.M.” Martinez. The mural is located on the concrete base of an electrical tower located in the Longhorn Shores hike and bike trail off of East Pleasant Valley.

The mural was originally created in the early 1990s as a commission from the city. It is a four-sided mural that includes a Selena memorial and a mural encouraging passers-by to not drink and drive. The other two sides are script based spray can art.

The original artist, Al Martinez, passed away in 1995 and this mural has become a memorial of sorts to him as well. For that reason, his family and other members of the spray can art community of Austin, would like to restore the mural to its original condition. Martinez was an important figure of the spray-can art community in the 90s and is still considered and important figure to this day.

One side of the mural was restored in 1998, but the mural has suffered fading from the sun, peeling, and small pen and marker additions from passers-by. There are also parts of the mural that have been painted grey by the city due to tagging. Color Squad would like to work to restore it in collaboration with Nate Nordstrom, a professional mural artist and a mentee of Martinez, along with other local spray can artists.

We feel that the restoration of this mural is a valuable contribution to the community as well as an incredible learning experience for the youth involved. The mural is located in an area of Austin that is rapidly changing. We feel that the renewal of this mural will both reflect the general facelift of the area and preserve an important part of the history of that neighborhood. It will also serve as a chance to teach our youth about local history of Austin while providing an opportunity for them to hone their technical skills.