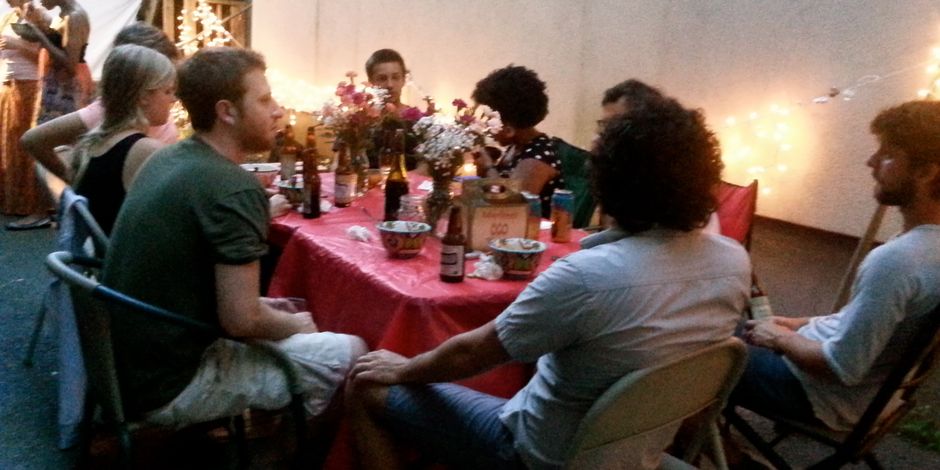 A month ago myself and a couple friends opened a pop up restaurant and cinema in a trash alley next to my Cambridge apartment. It runs every Sunday (Sundays are trash days) and hosts around 15- 20 people a night, though we would like to grow that number. I've been thinking about this idea for the past year, immersed as I was in the delicious ingredients of area farmers markets, and and lacking the capital to take over a commercial kitchen, or professional kitchen experience, I decided that my alleyway would be good enough. We serve 3-4 courses and show a schlocky flick. It's BYOB and pay whatevs.

English Major Nerd Time:
"Belly" refers to the idea of Carnival and the grotesque. In Medieval Europe the Carnival was a subversion of the hierarchy of the crown and church. During Carnival periods, always tied to a religious holiday, the hierarchy was reversed, it was the layman's holiday, the church and nobility were spoofed. There was no ceremony, only an immersive and democratic celebration led by no one. Instead of Virtue, sins were celebrated, sins like gluttony and lust. This reversal was symbolized by the lower half of the body, the parts dedicated to bodily functions instead of the head, where the crown and miter held their place. The belly was the most revered during these Carnivals as the true soul of the people. Hence our name.

Our philosophy is irreverence to an exclusionary restaurant culture. We have no shining kitchen, just an alleyway. We haven't been trained in a culinary school, we're only laymen. Our blasphemy isn't negative however, it's a celebration of food, a comedic nod to the mishmosh of traditions we grew up with in the city, the trends that make up the food scene today, and our culinary heroes. We have a commitment to using as many local ingredients as possible and bringing to you a unique and thrilling experience. It's more than just dinner and a movie, Belly is an interactive experience whose whole is greater than it's ingredients.