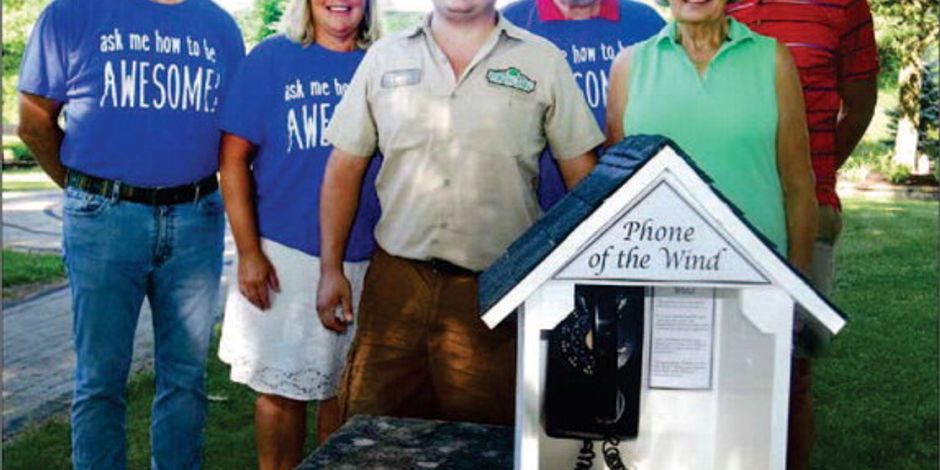 In a recent episode of CBS Sunday Morning, Jane Pauley introduced a piece titled, "Making phone calls to the departed". Lee Cowan showed us a family who walked through the woods in Oregon to a wall phone attached to a tree and nothing else. The members of the family picked up the phone and made a "long distance" call to the four year old child they had lost to illness the previous year. The “whispers in the wind” call from that phone allowed the family to connect to their daughter and sister. As the family explained it, though it makes no logical sense to make a call from a phone connected to "nothing" it allowed them to pour out their hearts and feel connected.
This phenomenon has spread throughout the world and has brought comfort to families from the Pacific Northwest, to Japan and Europe.
Dan and I would like to bring this small piece of comfort and love to Piqua.
After a preliminary discussion with the Awesome Piqua Trustees that resulted in the suggestion that we pursue the idea, we met with the members of the board of Forrest Hill Cemetery, Kyle Cooper, Cindy Pearson and Jeff Lange and their Superintendent, Jim Roth who wholeheartedly supported placing not one but three phones in the cemetery.

PIQUA — Awesome Piqua, a chapter of the worldwide Awesome Foundation, Trustees approved a grant application for a “Phone of the Wind”, based on a segment shown on CBS Sunday Morning, about a phone hung on a tree in a forest in Oregon.

People who had lost a loved one could come, “make a call” (even though the phone was not connected to anything) and say things they wish they had said or could still say to the lost person. This brings most people comfort and can help smooth the journey to closure over a loss.

The people who wrote the grant application met with the Forest Hill Cemetery Trustees Cindy Pearson, Kyle Cooper, and Jeff Lange and staff on Feb. 2, 2022 to explain the idea. The Trustees had all seen the CBS segment and were very enthusiastic and welcoming of the idea – so much so, that they requested Awesome Piqua produce and donate three Phones of the Wind, rather than just the one.

Using the $1,000 Awesome Piqua grant funds, the grant recipients found and purchased three “old style” rotary dial telephones. The Upper Valley Career Center Construction Technologies class constructed three “chalets” to house the phones. Quint Creative made the signage, which explains more about the purpose and use of the phones. The signage also has the feature of a QR code – a person can use their cell phone, take a photo or scan the QR code, and be directed to the Awesome Piqua website for more information.

“How pleased Awesome Piqua Trustees are to bring this idea and these three Phones of the Wind chalets to our Piqua Forest Hill Cemetery. People, in other locations, who have used the Phone of the Wind to speak to loved ones who have departed, have found some solace and comfort from the process. We hope Piquads will have the same good experience. This is just the latest example of an Awesome Piqua grant application, which will surprise, delight, and benefit our community,” French said. “Thank you to ”Dean” Dan French, the Awesome Piqua Trustees, UVCC, and Quint Creative for helping to make this project a unique reality. We plan to place one of the “Phones of the Wind” at the labyrinth and at two other locations in the cemetery, so visitors can easily find and experience the comfort these can bring. We will let the public know after the Phones have been installed,” Pearson said.

Awesome Piqua was started in 2016 as the first Awesome chapter in Ohio of the worldwide Awesome Foundation to help make Piqua a better place to live and work.