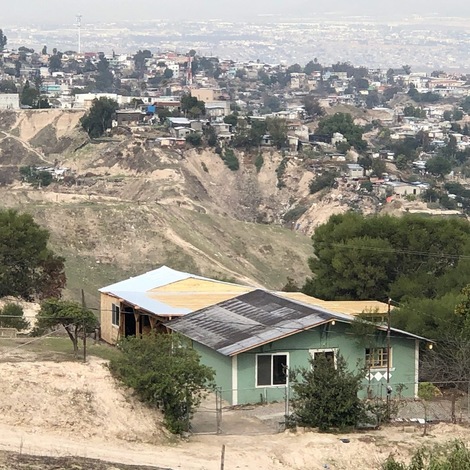 Thank you for this opportunity! The Bridge El Puente formed at the Tijuana/San Diego border in January 2019 when Douglas Oviedo, a free styling, youth pastor from Honduras met artists from Mexico and the United States, in his journey to seek asylum. We did not understand each other’s languages, but through music we understood each other’s hearts! We went on to write the anthem of the caravan “Juntos Somos Mas”, produce a music festival uniting all of the cultures migrating in Tijuana and produce a video series of poems Douglas wrote, sharing his journey of migration. We realized the power we had together to fight for migrant rights, change narratives, and more importantly...what we are able to achieve in a community where each person is free to share their gifts!

In June of 2019 Douglas and 2 other migrants were gifted land to build a women and children’s shelter. As many asylum seekers were being returned to wait in Mexico, under the MPP program, there was a huge need for housing. This became the first shelter in Tijuana by migrants for migrants. The core team inspired the help of allies from the US and Mexico to fundraise and donate labor to build Casa Hogar El Puente!

On February 2nd, 2020 we just welcomed our first families, as the shelter officially opened!! The post on our facebook translated from Spanish reads, “The home of the bridge, a place where our children can run free without fear of the streets and the night. Where they feel protected by their community all equally, that their welfare is within their reach, and they do not know loneliness.”

As I am writing this, I have received a message of how much completing the 2nd bathroom would relieve the multiple bathroom accidents that just happened from a line for the single working bathroom. We would be so grateful for the help to increase our capacity to receive more families in need, waiting at the border.

Funded by Awesome Without Borders (March 2020)