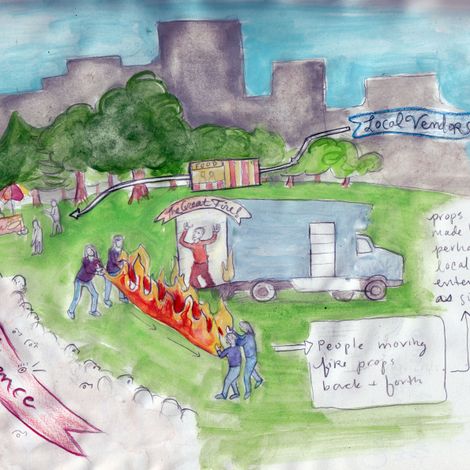 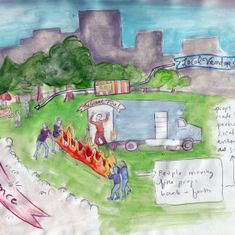 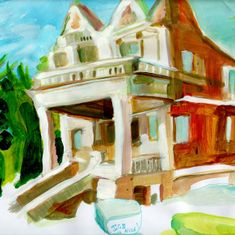 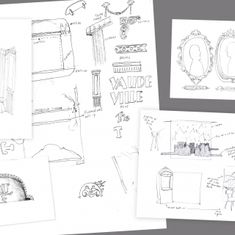 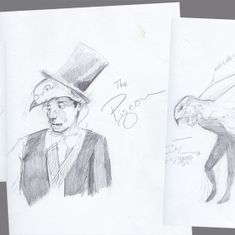 “The Great Fire: a Traveling Truck Show” is a community event that will tour Chicago this October! Reviving the form of early American traveling shows and referencing Chicago neighborhood histories after the Great Fire, we playfully spin a tale that engages audiences with storytelling, music, comedy, multimedia dioramas, and magic.

Our overarching storyline is inspired by historical characters and memories from each neighborhood, including vignettes about Ignaz Schwinn, August Spies, Riverview Park, and the changing street-scape of West Town (our main character, Denim Dennis is a Union Stone Mason turned swamp thing that freezes in Humboldt Pond and comes back every 30 years or so)—just to name a few.

In addition to the scripted parts, we have some local performers joining us: a rhythm and revival musical duo, a throat singer, a classical tenor, a wandering accordion clown, a bellydancer and her snakecharmer, a fire breather, and a magical mind bender. Sideshows will include fire poi, tarot readings from a custom deck of cards, an old-fashioned photo booth manned by the bee-bearded lady, and much more to come!

Before the tour, we are working with each site to connect with the area, spread the word about the project, and involve the community in-the-making. We are participating in the Milwaukee Ave Arts Fest in July with a “Make Your Own History” booth. In Pilsen, we have planned community days in the garden. For Roscoe/North Center, we are collecting memories of Riverview Amusement Park to use in an animation.