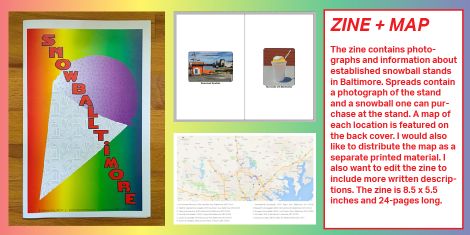 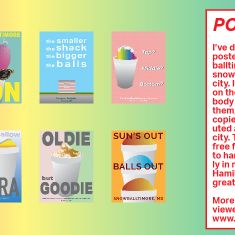 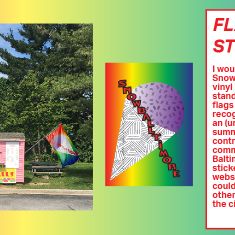 For the past three years, I’ve been working on a project called Snowballtimore. Throughout the summer of 2016, I visited over a dozen local snowball stands in Baltimore including Walther Gardens (the oldest snowball stand in the country!), One Sweet Moment, Elizabeth & Zyggie’s, Sensational Snowballs, and Summer Delights. I documented the architecture of each snowball stand in the early morning before the stand opened for the day. I then returned to the stand to order what I considered to be the most unique snowball flavor on the menu and photographed the snowball. I illustrated a map of the locations of each stand and assembled the photographs and map into a small zine (booklet). Each stand has its pros and cons: for example, Elizabeth & Zyggies has the best ice, but Sensational Snowballs has the best marshmallow. I highlight these traits in posters I’ve been designing since that first summer doing research. In addition to designing printed matter, I’ve continued to document, research, and write about snowball stands in Baltimore. My goal with this project is to establish Snowballtimore as an authority and archive for this unique Baltimore tradition and actively share the project (something I haven’t really done up to this point). I plan on building a website that will feature each snowball stand and include interviews with the owners and customers. I want to feature the posters I’ve designed so that website visitors can download them for free and print them out. In addition, I want to have posters printed and distribute them to each stand so that they can be given out to customers. I want to print out the booklets and distribute them for free in neighborhoods throughout the city. I want to publicly “certify” city snowball stands as being recognized by the Snowballtimore project by offering Snowballtimore flags and stickers to be displayed at each stand. I will continue to research the snowball tradition in Baltimore and include that history on the website.