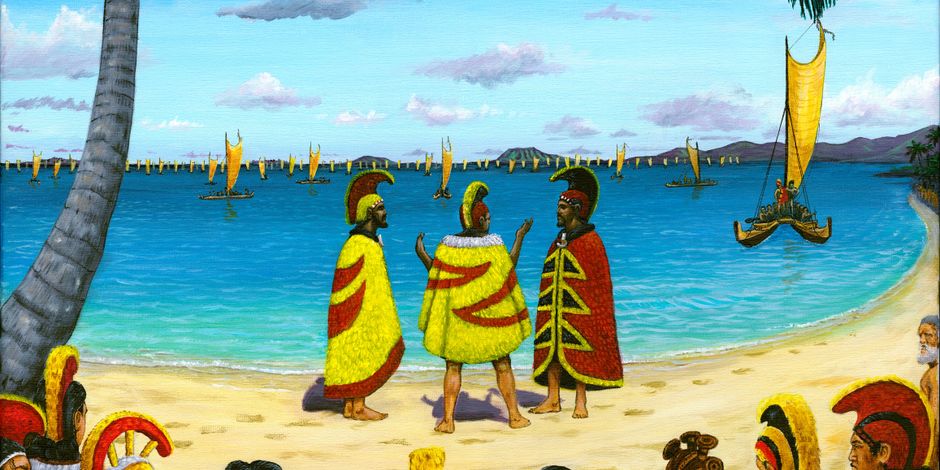 There is a special place on Windward O`ahu which figured greatly in Hawaii's history, and which we hope to tell the story through an Awesome Foundation grant. This is Naonealaa, which has a modern name attached to it - Kaneohe Beach Park.

Our organization has raised $1,200 of the $2,200 needed for the storyboard to be purchased, from an earlier grant given by the National Geographic Society.

In ancient times, this area was named Naonealaa, for the famous chief who once lived here a long time ago. In 1867, noted Hawaiian historian Samuel Kamakau tells the story: “Laa, that is, Laa-mai-Kahiki, was so named for his coming from Kahiki. After the death of Olopana, the kingdom was inherited by Laa, and he heard from Kila and others that Hawaii was a fertile land, and that the people were great farmers and keepers of fish in fish ponds. Oahu was the richest of all, so La`a became determined to come here to Hawaii.

At Naonealaa, the chief built three heiau, one of which was named Kalaoa. Perhaps the area is best known as the site where the chiefs of all the islands gathered to make peace. Kamakau describes this important place in the history of the Hawaiian people: “It was in January, 1737, that the two hosts (Alapai’s and Peleioholani) met, splendidly dressed in cloaks of bird feathers and in helmet-shaped head coverings beautifully decorated with feathers of birds. Red feather cloaks were to be seen on all sides, both chiefs were attired in a way to inspire admiration and awe, and the day was one of rejoicing as that of the ending of a dreadful conflict. So it was that Peleioholani and Alapai met at Naonealaa in Kaneohe. The canoes were lined up from Kii at Mokapu to Naonealaa, and there on the shore line they remained, Alapai alone going on shore. The chiefs of Oahu and Kauai and the fighting men and the country people remained inland, the chief Peleioholani alone advancing. Between the two chiefs stood the counselor.