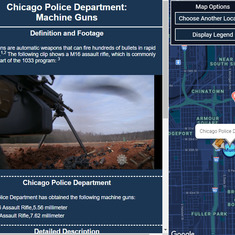 The Institute for Transparent Policing is an all-volunteer team of researchers and data scientists who are dedicated to making policing more transparent and understandable to everyone. We recently launched the Project 1033 Visualizer, a free, online web app that represents the nation’s most comprehensive visualization of the military gear currently housed in local police departments.

Most Chicagoans don’t understand the magnitude of this military gear problem: many local police departments in the Chicagoland area have obtained machine guns and other serious military gear (see screenshots). The Chicago Police Department alone has over 300 M16 assault rifles, a type of machine gun, in addition to a Mine Resistant Ambush Protected vehicle (“MRAP”), a vehicle used by the American military to withstand improvised explosive devices in the Iraq war (see screenshots)!

Chicagoans deserve to understand their local police force. To that end, we are asking for funding to spread the word of our software and get it in front of as many people as possible.

Second, we are asking for funding to recruit and empower Chicagoans to help us decode the dataset and make their police department more transparent.

Here is the problem: Although we have a vague understanding of these military items, we don’t know what most of these items do, as the pentagon used vague item names to cloak powerful military items in the dataset. For example, there's an item currently housed in 80+ police departments called a "ONLY COMPLETE COMBAT/ASSAULT/TACTICAL WHEELED VEHICLES." This is all we know about this item from the dataset alone, but when we submitted a FOIA request, we discovered that it was a 19-ton, 8-wheeled armored vehicle with a remote controlled machine gun!

We want to train Chicagoans to become ‘government investigators’ and submit FOIA requests. In the process, they will help us decode the dataset, gain skills to make them more informed citizens, and make their police more accessible.