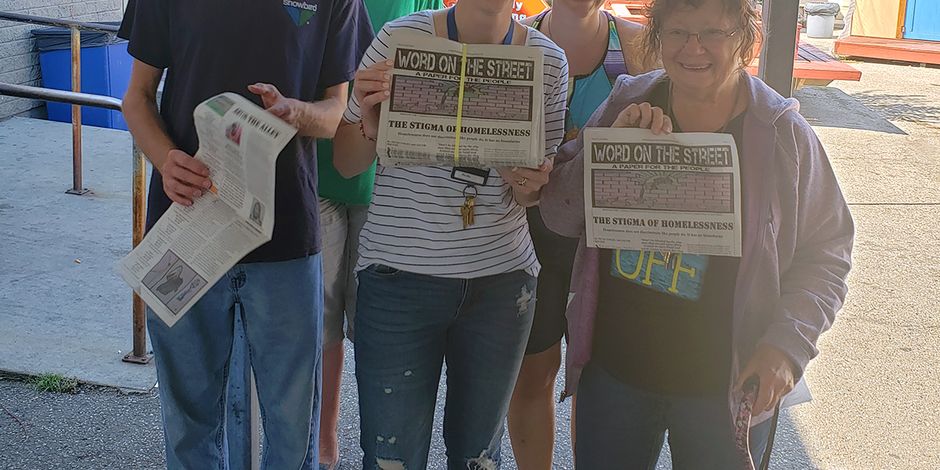 I am Jacob, and currently a resident at Interfaith Sanctuary, the only homeless shelter in Boise, Idaho that welcomes all people regardless of differences like faith or sexuality. With the support of a program called Project Well-Being and my Case Manager, Nicki Vogel, we started a newspaper called “Word on the Street.” It's purpose is to bring awareness and be a voice for the homeless community. It is designed to break the stigma against homelessness and inform people about resources, and the lack thereof, for mental health and other concerns that affect people experiencing homelessness.

We have published two issues so far. The paper offers a collection of narratives, informational articles, artwork and poetry by members of our community. It also has an up-to-date listing of resources designed to help those in need. The paper is managed and edited by members of Project Well-Being.

From the beginning it was tough to design and layout the paper due to lack of resources, knowledge and funding. From the start we only had a Chromebook and Google Docs to work with. What we needed was a PC with better storage and programs like Publisher and/or Indesign. It was an ambitious project, but once we published the first issue it received positive feedback. In under 2 weeks, we ran out of copies at most of our locations in newsstands around Boise.

The paper helps me develop my skills. Further, it gives me an opportunity to teach. I am teaching others how to design the paper so that it becomes sustainable. The project is helping a about ten of us in Project Well-Being work collaboratively as a team. After we published our second issue, one of the two main newspapers in Idaho, the Idaho Press, who has been printing the paper for us, announced that they will now include our future issues of “Word on the Street” as an insert in their newspaper. Thus it will become part of the media infrastructure of the state.