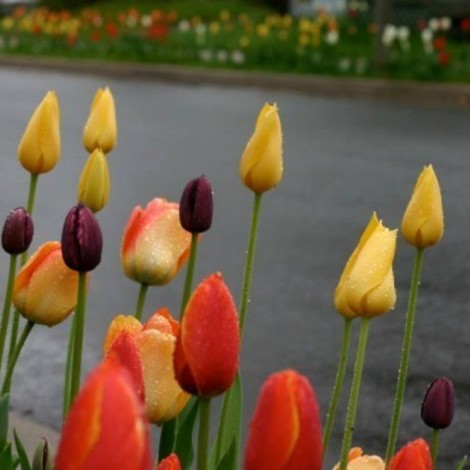 My project, Tulipmania, is about beauty and community, two things that are both awesome! I live on Tulip Street in Downtown Dartmouth. I want to plant tulips all along the street, on the unloved strip of land between the sidewalk and the road.

The typical median strip in HRM is full of weeds, scrubby grass, bare dirt and is just ugly wasted space. The problem is that no one wants to spend money to improve them because, although adjoining property owners are responsible for upkeep, the space is technically owned by HRM.

Last fall I planted a large tulip patch in front of my house in the median, which blossomed into a magnificent splash of spring colour (still blooming if you’re passing by). The response from the community has been overwhelming. Everyone loves the tulips. As one of my neighbours said, “they just make me smile.” A lot of people also travel through Tulip Street and many have slowed down to take a look or stopped for a picture. The median tulip patch is unique, fun and there’s something delightfully obvious, yet unexpected about tulips on Tulip Street.

Since my test patch went over so well, I would like to expand the effort. With an Awesome grant, more tulip patches could be added. I have gone door to door and almost everyone on the street loves the idea (41 of 43, 96%). It’s a feel good project the community can get behind. The best part is this awesome idea is actually two awesome events in one. If we get the funds to buy bulbs, the whole neighbourhood will come together in October to plant them. Neighbour will help neighbour and we’ll cap off the afternoon planting party with a potluck bbq.

In the spring, Phase 2 of Tulipmania begins when the flowers bloom and everyone on the street and in the wider community is treated to an awesome spring display. The tulips should also come back for several seasons. One awesome grant, two awesome outcomes with several more seasons of awesomeness thrown in for good measure.

I’m the right person to champion this because I have already done it in front of my house and I have already organized and sold the community on the idea. All we need is the financial resources to carry it out.

I’ve done a few other awesome things, but my favourite is that I’ve spent years building digital replicas of Halifax landmarks and sharing them online, bringing Halifax to the world through the urban planning game, Sim City.