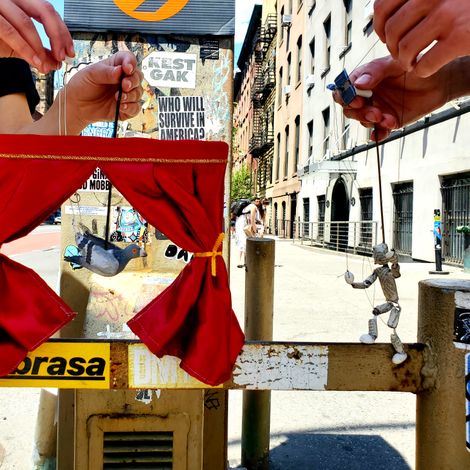 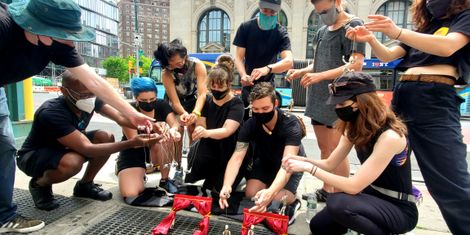 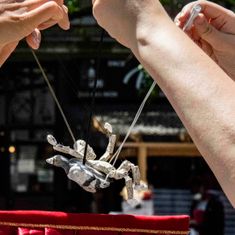 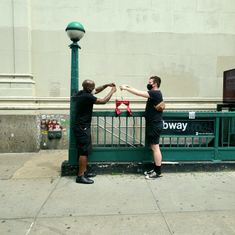 On a single street corner, a team of puppeteers perform a series of miniature site-specific puppet shows that take place on five found "stages," or scraps of overlooked urban infrastructure. Tiny red curtains transform fire hydrants, mailboxes, ledges, and lampposts into stages for small puppets. All five stages will have their shows playing simultaneously; puppeteers beckon passersby over, performing and then guiding them on to the next stage.

Each minute-long performance will follow a humanoid character who attempts to master and take control of the terrain of their “stage”, but is thwarted by the site’s geography and the antics of subversive pigeons - the quintessential New York symbol of what is both ubiquitous and overlooked. The project’s title emerges from the provocation that this festival can happen anywhere, because there are stages everywhere.

The first-ever Anywhere Festival of Everywhere Stages will be presented as part of the Art in Odd Places Festival, which will take place along 14th Street in Manhattan from May 14-16, 2021. This tiny festival within the larger AiOP festival will take place on a single street corner: the northwest corner of 14th Street and 8th Avenue.

This project aims to subvert normative, capitalistic, prescribed uses of space. It whimsically proposes an alternative: celebrating, acknowledging, and “re-seeing” overlooked and taken-for-granted elements of our landscape. In a world where space is highly policed and regulated in order to preserve the flow of capital and property values, this project proposes a new way of experiencing urban space, and draws attention to the arbitrary power structures that shape it. The work seeks to animate the usually inanimate; transforming objects into performers, and scraps of space into stages. It is an experiment in queer use of space.

This project provides a unique and much-needed experience for both the audience who encounters it and the community of puppeteers that will assemble to perform it. The Anywhere Festival will be a free public performance that will reshape people’s ideas about what puppetry is and can be; unlike simplistic and kid-oriented puppet shows, these pointed and politically minded miniature performances will utilize a juxtaposition of puppetry styles and a uniquely site-responsive approach.

The show will poke fun at the concept of the proscenium, subverting a classic symbol of a type of theater that is (depending on your opinion) becoming obsolete. Viewers will leave this performative installation with a new outlook on their surroundings - one in which any given place is a potential space for performance and commentary, and even the most seemingly mundane things are worthy of appreciation.

The piece will encourage a playful and subversive engagement with public space (whether with puppets or not). This performance will also offer unique opportunity for members of the New York puppetry community to return safely to live performance, and a space for queer performers to claim public space collectively.

This is the first Anywhere Festival of, I hope, many. In future versions of the festival, I hope to work in new locations with new community partners. I also plan to host workshop versions of the festival, in which participants choose locations and devise performances themselves. Supporting this first iteration of the project will help me ensure that future versions can emerge, develop, and be awesome in other places throughout the city (and world).