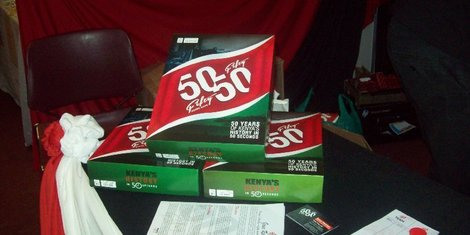 The winner for the March 2014 grant is Casey Marenge. Casey is a quadriplegic who suffered a tragic road accident in 2003 and became paralyzed from the shoulder downwards. Since then she has been championing the rights of people with disabilities while creating awareness on road safety through her charity organization - Chariots of Destiny. Casey would like to generate income to sustain her various charity initiatives. She has to this end developed for sale a truly cool and exciting game known as the 50-50 board game.

Casey now describes the project in her own words:

The game aims to create a fun way to relive memories of our beautiful country touches on words that define Kenya in the past 50 years. I took one year off working on the NGO to carry out research, and to create the board game, 99% done just by voice-activated software. The game which is a points system and team effort game sees players give clues and descriptions to as many words possible out of a total of 20 words and get their teammates to state the word on the cards in 50 seconds. The game has a total of 2500 words touching on anything and everything that has played a part in shaping Kenya's history in the past 50 years. The game also has a "Supreme Court" section which gets team members to either gain or lose points. This section touches on events, good or bad that have taken place in the country in the past 50 years. The vision for the game is to not only promote our countries tourism industry by selling the game in hotels, Curio stores and putting it in Kenyan embassies globally, but to also provide a fun way to educate the youth in our country.

We are also working on putting the game in different hospitals, rehabilitation centres as well as schools to be used as an entertainment and indoor activity for those in the facility. The 50/50 board game has also served as a great memory to Kenyan's in the diaspora as they remember events from there childhood and from back home. The game sold out in the first month of production with the greatest achievement yet being invited to Statehouse to present the board game to the First Lady her Excellency Margret Kenyatta which I believe is pretty awesome!!