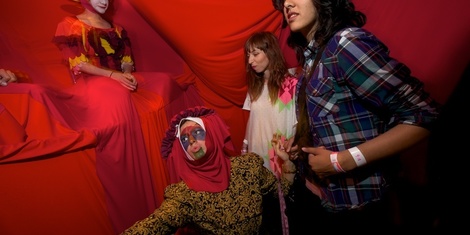 Rooms Play is an immersive performance experience. Crafted in 2010 and 2011 by over 60 collaborating artists based in Baltimore, MD, Rooms Play 2013 is in the works under a new organizing collective: Pilar Diaz, Person Ablach, Sophia Mak, Ada Pinkston, Victor FdeM Torres and Evan Moritz.

In 2010, the first year of Rooms Play, The Copycat Theatre wrote a script based on a combination of Joseph Campbell's Monomyth (The Hero's Journey), Alice in Wonderland and the Digestive System. The audience was given the role of the "hero," and asked to complete numerous challenges and tests, which occured throughout 20 rooms created under the direction of different creative directors. Our interest was in creating an experience which was highly collaborative, immersive and empowering.

In 2011, Rooms Play occured during the 8th Annual Transmodern Festival. The script furthered an engagement with the Hero's Journey, this time exploring illegal Immigration as the underlying theme. In 22 rooms across two spaces: The Whole Gallery and Current Space, groups of 3-4 participants were guided through alienating and highly charged environments.

Rooms Play is in the works for the third time, in a radically changed form, utilizing a transformation of space and a set/cohesive series of events to take the audience on an emotional roller coaster.

This year we have written a script that aims to confront and engage fear, xenophobia and different emotional states. The installation and performance will be a highly crafted sensory experience, taking place during the 10th annual Transmodern Festival in May 2013. Taking place across 10-15 "Rooms," the audience will be impacted by the scale, content and overall experience of this immersive performance.