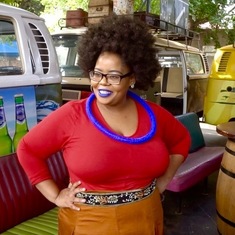 Our project is a 52-minute documentary. We need funding to complete the project and bring it to worldwide audiences.

IN STITCHES follows three trailblazing South African comedians who are bringing their mother tongues to the stage. More than two decades after the fall of apartheid, 11 official languages thrive in South Africa. Despite this, English continues to dominate the comedy scene. Sixty percent of the population cannot understand a word.

Vernacular comedians like Noko Moswete, Zicco Sithole, and Luphelo Kodwa are flipping the script. Addressing the long-ignored South African majority, these artists are decolonizing and democratizing comedy. Audiences are hooked. Vernac shows buzz with unparalleled energy, somewhere between a rock concert and a sermon. Never before have black South African audiences shared such powerful catharsis, led by magnetic comedians who look and sound like them. If laughter is the best medicine, these artists act as guerilla medics, using humor to tend to the untreated masses.

Documentaries about Africa often center on the continent’s most tragic people confronting its most tragic challenges. These are important stories to tell, but the sheer number of these disheartening films is misleading and misrepresentative. We are not making that kind of movie. Though IN STITCHES addresses historical trauma and personal hardship, it is ultimately an uplifting tale about the power of comedy, focusing on characters with agency.
In the age of Trump’s “shithole countries,” audiences need to hear stories that increase empathy and global awareness, narratives that encourage people to open their minds—and hearts—to new perspectives. Our film tackles this mission by celebrating laughter. What better conduit for human connection?

Грант предоставил Awesome Without Borders (May 2018)