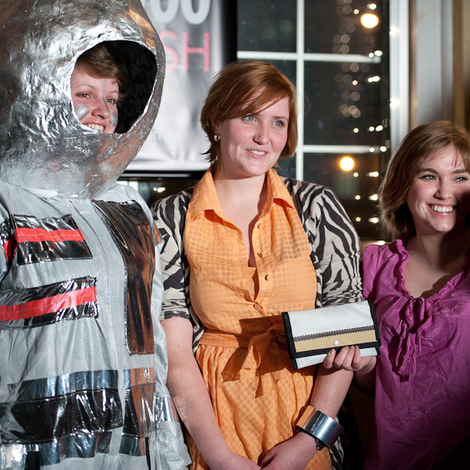 I am a NSCAD student and a member of Dudes and Ladies Arts Society, a band of like-minded artists and enthusiasts committed to using our creativity, ingenuity, and love of a good time to bring great collaborative public art to Halifax and the world.

SPACE BAGPIPERS is a public event/ intervention that would unfold like this:

It is a weekend afternoon. Inexplicably, twenty or so bagpipers, dressed in fabulous silver spacesuits of variable specifics, appear in downtown Halifax. They walk down Barrington Street, one stopping on each corner, until they are distributed throughout the downtown core. Then they play their bagpipes, and glorious, droning, Highland cacophony fills the city for 15-20 minutes. When they are finished, they leave, reuniting with each other as they walk back from whence they came and forming a climactic, raucous, SPACE BAGPIPER parade, never to be seen again.

The bagpipers would be volunteers from the legions of bagpipers employed in Halifax during the tourist season, offered lunch and the chance to participate in an event that appreciates their substantial skill and brings it to the local population in a fun, unexpected way during the off-season. The costumes will be made by me and the other talented members of Dudes and Ladies Arts Society, adapted to the functional specifics necessary for bag piping. NSCAD University’s Granville campus could serve as our home base/mothership. SPACE BAGPIPERS would be a marvellous departure from the everyday, a half-hour for revelry in the nonsensical, and an opportunity for spirits to be lifted in the grungy Halifax spring.