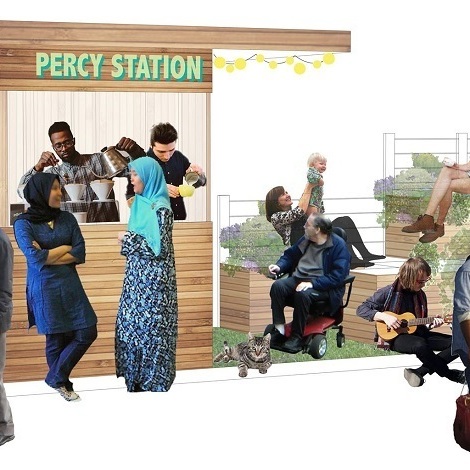 March’s Awesome Ottawa award goes to Jackpine Labs, led by Liam Mooney and John McClelland, and to Atelier Ruderal, led by Luisa Ji, Lee-Michael Pronko, and Monique St. Pierre, for their project “Percy Station,” a streetside shared community space to be set up this summer on Somerset, near the intersection with Percy.

“West Somerset Street is an undervalued urban space,” explains John. “With the recent closure of Raw Sugar and the tragic destruction of The Daily Grind, the area lacks a hub for cultural activity and exploration more than ever. To combat the situation we are planning to build a modular structure that thrives on rotating programming and functions as a shared community space. Percy Station will draw people to a part of the city that is in desperate need of renewed urban cultural programming.”

“Programming for Percy Station,” John continues, “will include a rotating coffee house and small-scale cultural events. Local businesses will be invited to take part in serving coffee and drinks during live entertainment. Events will be free, with programming including live music, poetry readings, and theatre sessions. Percy Station will also include a bike pumping station, with tools and bike parking spots on the back side of the structure.”

Through the City of Ottawa’s Streetside Spots Program, Percy Station has approval to transform an area of street parking from April 1 to October 1. You can follow progress and learn about planned events through Facebook.