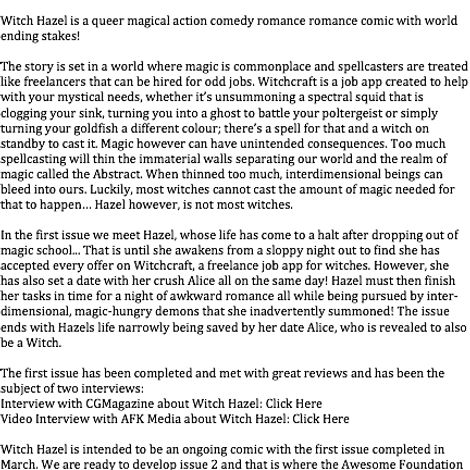 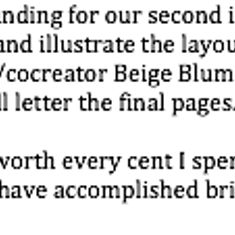 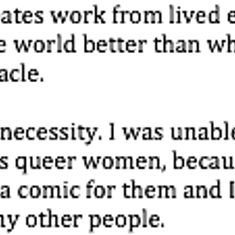 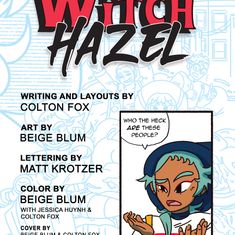 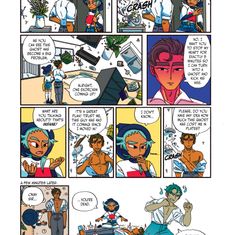 My awesome is project is Witch Hazel!

The story is set in a world where magic is commonplace and spellcasters are treated like freelancers that can be hired for odd jobs. Witchcraft is a job app created to help with your mystical needs, whether it’s unsummoning a spectral squid that is clogging your sink, turning you into a ghost to battle your poltergeist or simply turning your goldfish a different colour; there’s a spell for that and a witch on standby to cast it. Magic however can have unintended consequences. Too much spellcasting will thin the immaterial walls separating our world and the realm of magic called the Abstract. When thinned too much, interdimensional beings can bleed into ours. Luckily, most witches cannot cast the amount of magic needed for that to happen… Hazel however, is not most witches.

In the first issue we meet Hazel, whose life has come to a halt after dropping out of magic school... That is until she awakens from a sloppy night out to find she has accepted every offer on Witchcraft, a freelance job app for witches. However, she has also set a date with her crush Alice all on the same day! Hazel must then finish her tasks in time for a night of awkward romance all while being pursued by inter-dimensional, magic-hungry demons that she inadvertently summoned! The issue ends with Hazels life narrowly being saved by her date Alice, who is revealed to also be a Witch.

Witch Hazel is intended to be an ongoing comic with the first issue completed in March. We are ready to develop issue 2 and that is where the Awesome Foundation would be an incredible help to bring it to reality!