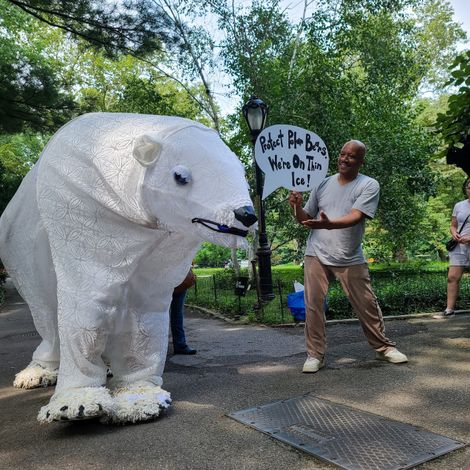 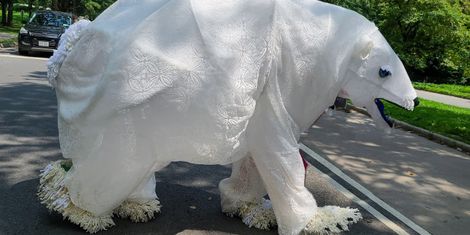 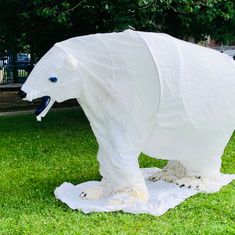 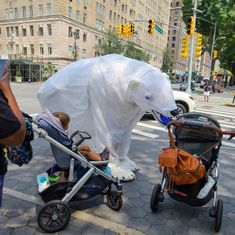 Qanuk Nanuk is a project that began just before the global pandemic struck. ‘She’ made her debut at The American Museum of Natural History in late February 2020. My name is Kathleen Doyle and I was commissioned by the museum to create a performance to celebrate International Polar Bear Day. The 10’ long, 8’ high walk about puppet requires one puppeteer to operate the eyes, mouth, neck, head and front legs. The second puppeteer operates the tail and the hind legs. I hired a master builder to build the bear. I have also hired colleagues and friends to take turns inside the bear with me. I usually helm the face and front legs.

At her first appearances at The American Museum of Natural History, Qanuk received warm welcomes, enthusiastic attention and invitations for more appearances. Of course, all of these engagements were cancelled due to the corona virus. But while in lock down, I continued to work on the project. In fact, I with the help of another artist colleague, I made two marionette polar bear cub puppets as Qanuk Nanuk’s abandoned babies. Studio 522, a popular gallery in downtown Manhattan, invited me to exhibit all three bears. And The New Victory Theater/42nd Street Studios offered me guidance on next steps to keep Qanuk active. We took the bear out for pop up meet and greets all around New York City, from Central Park to The High Line to the subway platforms. Videos, captured and posted online by observers, garnered hundreds of thousands of views and comments and so we see that Qanuk Nanuk is striking a chord.

With these polar bears, activism and artwork are optimistically stitched together.

News of climate catastrophe after catastrophe can be overwhelming and disheartening. We can feel buried in a landslide of hopelessness and guilt. It's my intent that Qanuk elicit more than a smile and a selfie, but care and change to save our climate and our endangered animal populations. I aim to reach people with surprise, charm and delight!