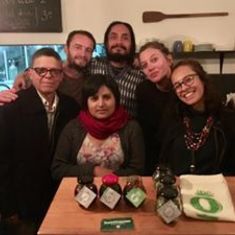 Huertomanías is an organic urban garden cooperative in Quito (Ecuador) that seeks to create a space where people with severe mental illnesses, such as schizophrenia or bipolar disorder, can exercise their right to work, generate income, and partake in a participatory democracy. Our goal is to create an autonomous and sustainable microenterprise where all members participate in the planning, decision-making, production, and marketing of high-quality organic produce and value-added products. We seek to promote an inclusive work environment that challenges typical models of production.
This awesome idea was born in 2014 during an assembly of users of a community mental health service, their family members, and professionals. The most common concern raised at the assembly was the worry of dependency. The stigma surrounding disabilities and the varying needs make it difficult to enter the labor market. The assembly resolved to create Huertomanías, and in 2016, we were fortunate to access an 800㎡ plot of land located in a town within Quito.
At Huertomanías we hold monthly assemblies where we discuss our points of view, make compromises, and reach decisions. Exercising the right to a voice and vote is part of developing autonomy. One of the topics discussed was how to organize our labor system. We wanted a system that accommodated our varying needs, yet was also fair and encouraged participation. Thus, we created a structure where members earn points based on the effort and time they put into performing a variety of activities. The more points gained, the more income earned. However, if someone has a rough month and doesn’t attend labor hours they aren’t penalized.
We currently are made up of seven members, but our goal is to extend our community to twelve by the end of the year. Moreover, we want to serve the community at large by creating a model that can be replicated for other initiatives that revolve around labor inclusion for marginalized populations.

What our trustees are saying:
"I voted for Huertomanias because gardens are awesome and the project's aim is to be self-sustaining. It's important to support the work of organizations that provide economic opportunities where the leadership and decision-making are in the hands of disabled people."

What our grantee is saying:
"Receiving the Awesome Award was like a breath of fresh air. We were so excited to see that people around the world are noticing our efforts and we are not alone in our fight for our rights."