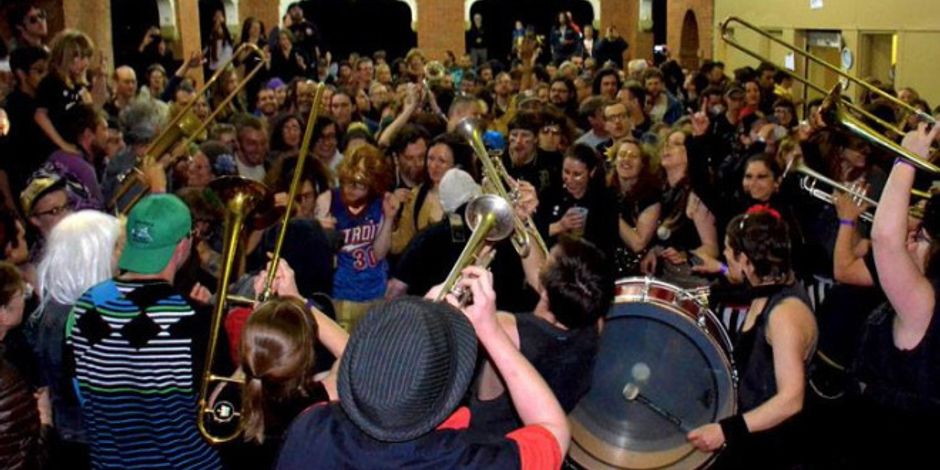 The workshop will begin with an overview and introduction to What Cheer? Brigade highlighting their role and identifying what it means to be a community band. We will talk about WC?B’s involvement with Building 16 (an artist space in Providence) and how they used their music to send a social message. Social Justice plays a large role in What Cheer Brigade’s ethos and we want to identify that and highlight how students can use music to send a message for change. We will outline the structure of the band, review individual responsibilities in and outside of the band, discuss their democratic approach to performances, their history of collaborations and a basic history of traditional balkan and carnival music. Students will be asked to identify these elements and show examples in both WC?B’s music and in popular music. We will also review the history and show video examples of Providence’s DIY music spaces and artists. Being a mobile acoustic band is an important part and helps to define at what capacity the band can perform. We will discuss the strengths and limitations of being an acoustic mobile band and review WC?B’s method of touring both in the states and in Europe. A 2010 WC?B European tour documentary will be shown to highlight the ups and downs of performance and touring including busking all the way to their award winning performance at a Brass Festival in Spain.
Part 2 would be rehearsals and collaboration. We have asked both WC?B and UPrep to choose a song that they would like to perform and to teach each other. They would break down into "sectionals" and work together re-composing the songs in smaller groups.