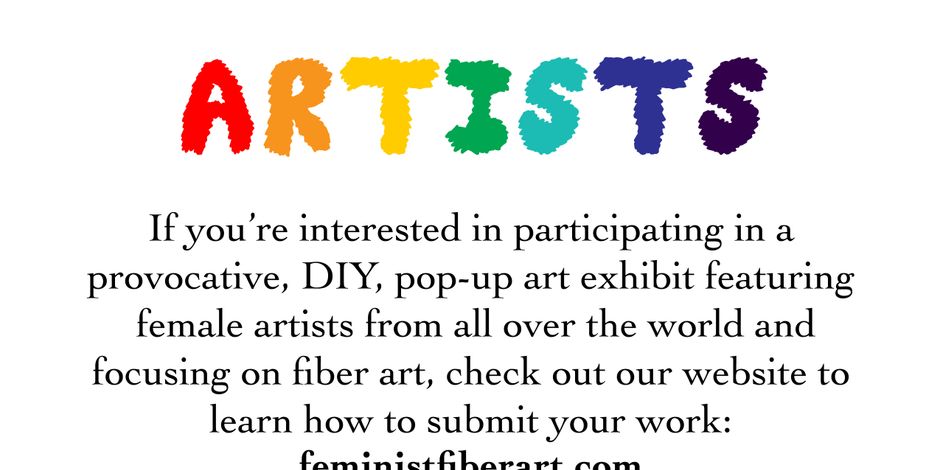 I am organizing a pop-up, DIY, feminist art exhibit through my independent artist business, Iris Nectar Studio. The exhibit is featuring only artists that self-identify as female and focusing on fiber art. I am still accepting submissions until June 30 from artists all around the world, but have secured several internet-famous artists who have confirmed that they will participate. This includes artists from England and Iceland who will ship their artwork to me in Boston.

I decided to organize this exhibit to give a voice to female artists who are so frequently shafted from the art world that focuses on male artists. Since fiber art has such a long history as a craft produced by women, I chose to fuse the two concepts together into one feminist art exhibition.

The exhibition will take the form of an art crawl through alternative art spaces in the Greater Boston region, beginning in Somerville, with a gallery opening of August 14. The work will remain installed in Somerville for a month before moving to Cambridge, and then other neighborhoods within Boston for several months. During the gallery opening event, artwork will be installed in three different creative venues - Aeronaut Brewing Co., Arts at the Armory, and Washington Street Art Center, - and viewers will be invited to view the artwork through the form of an art crawl, checking out the artwork installed at all three venues before attending the musical performances at the Armory. Bands fronted by strong females will perform at this event, decked out in handmade costumes constructed from fiber. This will demonstrate the importance and functionality of fiber art.

This exhibit is exciting because it continues to grow as artists and followers share the call for art online. It initially began as a small project to take place in a little gallery, but I have run with it and secured several locations in order to accommodate as many artists as possible, and we have not established an end date!