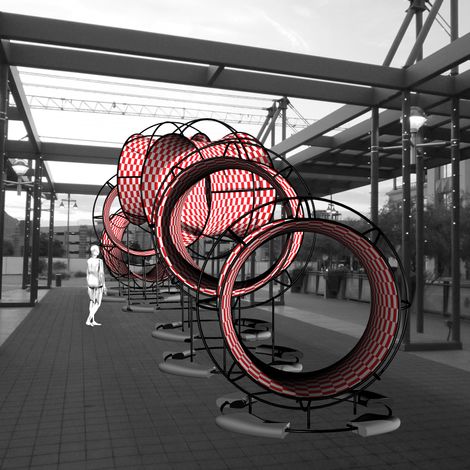 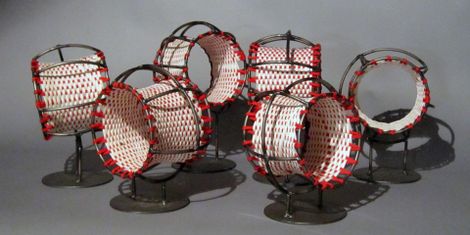 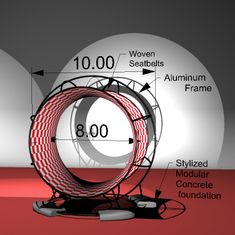 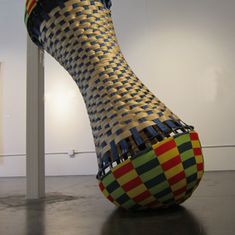 My larger work, being made up of mobile suedo-architecture, fits into the genre of architectural intervention, which includes wonders as diverse as Barnum and Bailey’s Circus to Chip Lord’s Ant Farm. As the world continues to move into the built urban environment, and the current generation tries to find its place in the world, this field is enjoying a renaissance of sorts. My project, Twistedly Dandified, brings together ideas from formal sculpture, the automobile, playgrounds, the circus, and Robinson Crusoe.

Recently, I found a surplus supply of seatbelt webbing, and have been weaving this webbing at a modest scale. As a material, seatbelts are protective, strong, and colorful. When woven this strapping not only creates simple textile patterning, but a large sturdy surface, allowing the viewer to climb and explore the object. I am proposing to create 5 or 6 small woven rooms. For each room, I will make large spherical aluminum structures for the seatbelt material to be woven onto, articulating a conical basket large enough for an adult to comfortably stand in. These rooms will provide an alien environment ripe for exploration, in which the viewer might return to a childhood curiosity and children can run wild.

Twistedly Dandified consists of 6 large-scale, interactive objects that entice participation from the public. It’s a large, colorful-tactile installation, which will undoubtedly draw the attention of anyone who sees it; taking on the role of an architectural intervention, to conceptually connect ‘high art’, architecture, playgrounds and participatory installations.