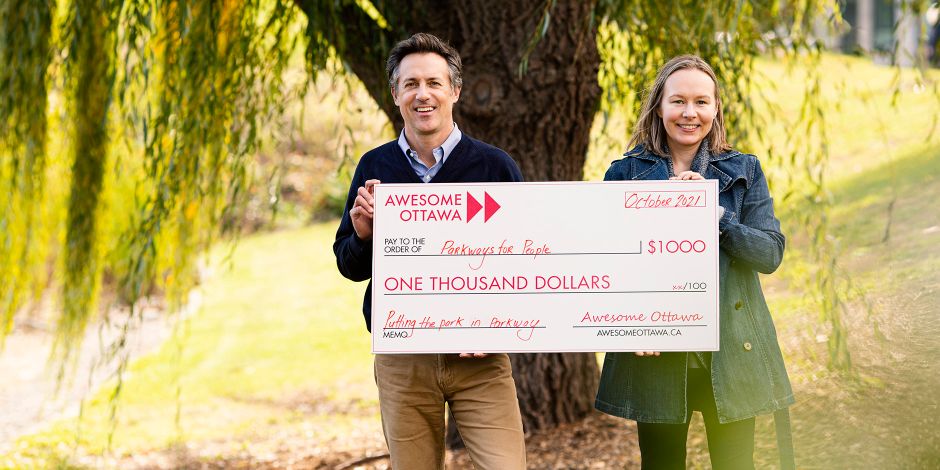 October’s Awesome Ottawa award goes to Neil Saravanamuttoo and Erin Maher to help put the “park” back in “parkway.”

“Parkways for People,” explains Neil, “is a coalition of organizations and people working to create transformative change to the national capital parkways, with an emphasis on more active use.”

“In 2020 and 2021,” he continues, “residents and visitors had unprecedented access to the National Capital Commission parkways for active use, as a means for promoting wellness, exercise, and safe socializing. The use of parkways for walking, biking, and rolling showed us how these spaces can be designed for people, in addition to cars – with exceptional health, social and community building benefits.”

“The overwhelming success of these road closures,” says Neil, “has caused us to question why we would ever want to go back to the way it was before. As the 2021 NCC Weekend Bikedays comes to an end, many people are deeply concerned that this natural experiment in reclaiming parkways for people will also come to an end, and that the region will go back to business as usual next year.”

“Parkways for People will serve as a public voice to help new approaches move forward faster and further. We believe that reimagining the parkways can be as transformative to the National Capital Region as the introduction of Rideau Canal Skateway was in the early 1970s.”

You can find out more and lend your support at parkwaysforpeople.ca.

Neil is the former Chief Economist of the G20’s infrastructure work, and father to two teenage girls. Erin is a federal public servant and mother to two young children.