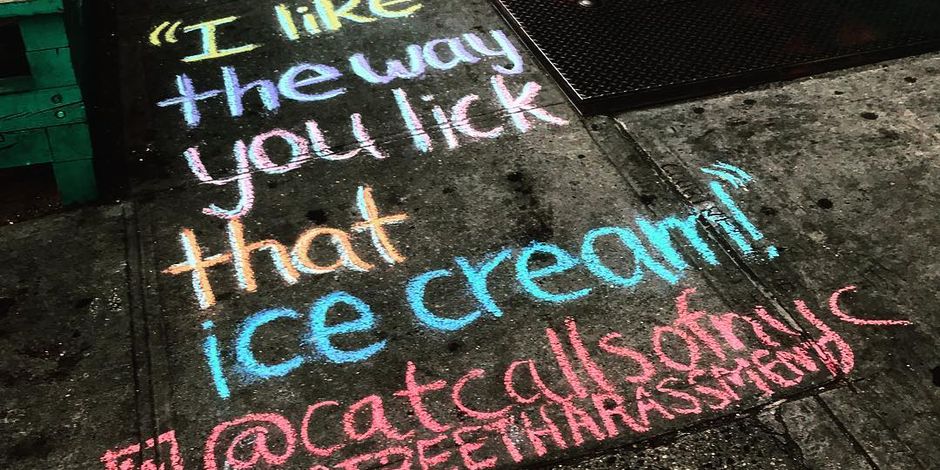 Cat Calls of New York is a grass roots, youth led project that aims to change the culture of street harassment by making it more visible. Every day, Cat Calls receives hundreds of messages through instagram from people who have been victims of street harassment. Armed with these stories and a box of chalk, a group of volunteers takes to the streets, visiting sites where harassment occurred. Once there they leave colorful chalk drawings of the harassers words for the world to see, making an often isolating problem more visible in the world.

Sophie, who was inspired to start the project in 2016 in large part due to her own experiences with street harassment, wants these visual reminders to both hi-light the scale of the problem but also to empower those who face harassment to realize they are not alone. In her own words:

“Street harassment can be an upsetting, shocking, and isolating experience. I believe that the chalk messages have a lasting effect because the verbatim phrases of harassment force people to pay attention. They make people who wouldn’t normally face harassment feel the force of these words. They help those who do face harassment realize that they’re not alone and encourage them to share their stories.”

The project, which started in New York as a class project for Sophie, has grown to over 180k followers on Instagram and has since inspired more than 150 youth activists around the world to start their own local versions of the project in a movement that is collectively known as Chalk Back. Participants in different chapters share support, advice and successes through a communal WhatsApp group that helps those that are just getting started.

Sophie's plans for the future of the project involves empowering her team of young volunteers to take more of a leadership role. By doing so she wants to run more group storytelling and chalking events in parks, where large numbers of victims of street harassment can come together, hear each other's stories and leave large collective chalk works for the world to see.
Her dream is to work with the city and artists to create a permanent mural to highlight the issue of street harassment and work with transport officials to run a series of posters on the subway and on buses to raise awareness of the issue.

If you would like to join Cat Calls of NYC’s growing group of volunteer chalkers, you can sign up on their website. If you don't live in New York, check out the list of other local chapters at http://www.chalkback.org/ to find a group near you or to start your own.