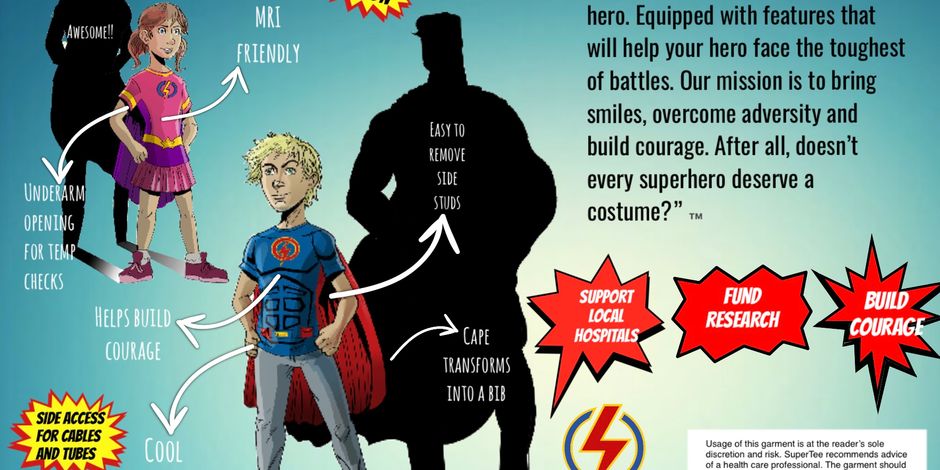 Supertee project is the new medical garment created for sick kids in hospital. Disguised as a superhero costume, this new innovative hospital shirt is-
100% cotton with non toxic print
Press studs on both sides and over one should to bypass iv drips, central lines and breathing masks or feeding tubes etc.
The spaces between these press studs allow for these tubes and monitoring lines to be nicely organised.
It’s MRI, X-Ray, and P.e.t scan friendly
Has underarms exposed for rountine thermometer checks which allows for a more restful sleep
Has a cape that doubles as a bib!
Is packaged in a reusable tin which contains a free comic/activity book, 5 x stickers and a bookmark for the parents.

The supertee concept revolves around the studies of the “Batman effect” from child psychologist Dr Stephanie Carlson. In this study Dr Carlson found when children dress as their favourite superhero they adopt the persona of that hero and thus were able to endure tasks longer and distance themselves from the tasks through the use of imaginative play.

The goals of the supertee project are primarily to encourage the fighting spirit of children and their families when faced with life threatening conditions, provide a degree of independence by allowing an easier way to change clothes during a hospital stay (thus increasing hygiene and reducing nurse calls). It also aims to provide a new way to fund for research into childhood illnesses.

The supertee project is only several months old. Launching at the very hospital that saved my daughters life, and since then we have begun to make our way around Australia’s children’s hospitals.