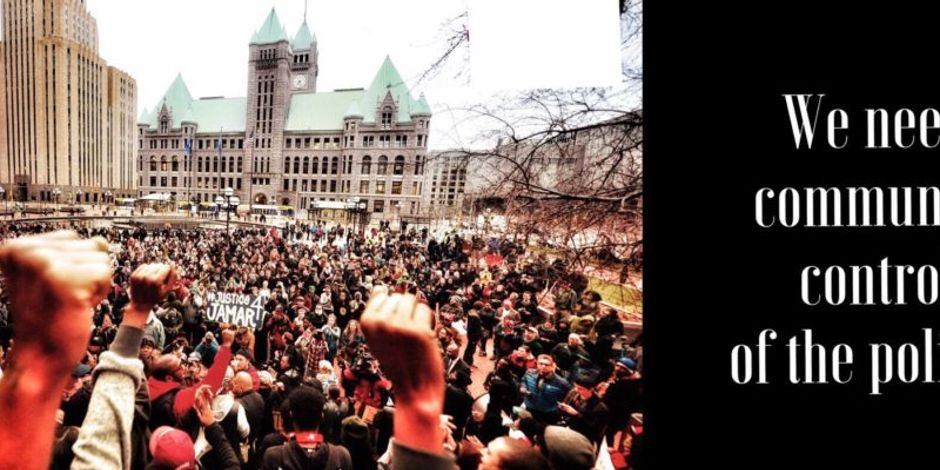 The Twin Cities Coalition for Justice 4 Jamar(TCC4J) formed after the murder of Jamar Clark by the Minneapolis Police Department on the night of November 15, 2015. After the 4th Precinct Occupation, we recognized the need to continue gathering people around the fight against police crimes. We believe that this fight can and must unite the Black Lives Matter movement and everyday working people in the community.

TCC4J meets weekly to plan community meetings, marches and rallies, press conferences, and actions which unite our community and pressure city, county and state officials to hold police accountable and end police violence in our communities. Our events and collaborations have attendance of 50 to 10,000+. In particular, we centralize our organizing in the vibrant community of North Minneapolis.

We have worked in support of: Jamar Clark, Thurman Blevins, Philando Castile, Justine Damond, Terrence Franklin, Marcus Golden, Cordale Handy, Billy Hughes, Map Kong, Micheal Kirveley, Phil Quinn, Jaffort Smith, & many others! In addition to organizing events to fight-back against police crimes, we have also helped to organize anti-racist and other movement solidarity events such as a Charlottesville Solidarity event in 2017, Cops Out of Pride actions in 2017 and 2018, and others. Right now, we are organizing to demand community control of the police.