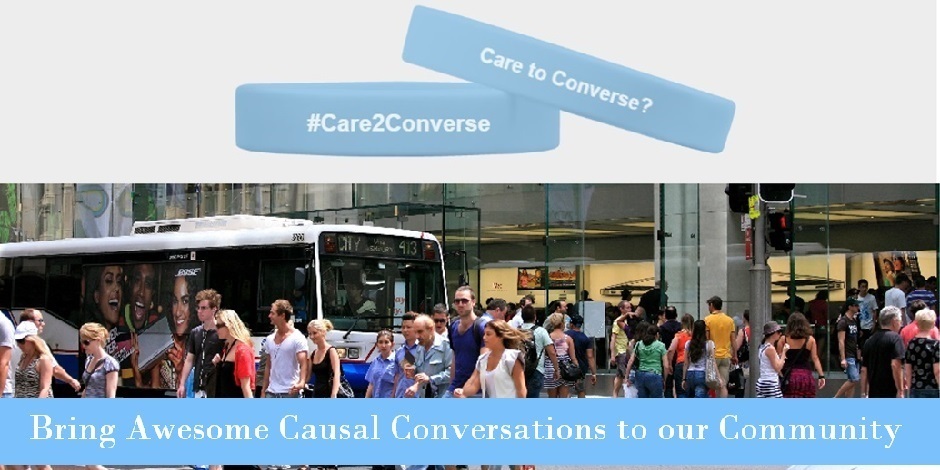 Solemn stares, seldom smiles, this is what I see most days as I commute around Sydney city. My project involves creating a visual representation worn by those who are happy and willing to have a casual conversation. This will take shape in a badge or band which says “Care to Converse?”. The idea would be for everyday commuters to start having casual conversations with the awkwardness taken out. By wearing of a band/badge people will feel free to approach those that are up for the chat.

We live in close accessible communities and yet we do not know the people who travel in the same space as us. I see this project as a way to continue the conversation, something similar to RU Ok day, but thought about every day. There is a phenomenon I call “Familiar Strangers” these are the people you see quite frequently on the commute or in your area, and they are familiar to you but you've never spoken. Who knows what you might find out, or what connections you might make from giving casual conversations a chance? Research has shown that there are benefits in conversing with strangers, including increased happiness.

The Care to Converse project is a way to create support for friendliness and connection in the community. And if you don’t feel like it, you can always take off the band or badge or even pass it on to someone who does.

Wearing the band/badge will make a big difference! Simply by seeing someone else who "Cares to Converse" you already have a sense of connection even without conversation. Like a visual community kinship. Furthermore it could bust discrimination as simply by wearing the band/badge you will have an instant talking point to start a conversation with someone you ordinarily wouldn't!

The idea itself is a simple one, the concept easy to understand. All I need is people to participate, a motivated crew to help head the project to success and the bands/badges to spread the conversational love (which is where your awesomeness comes in)!