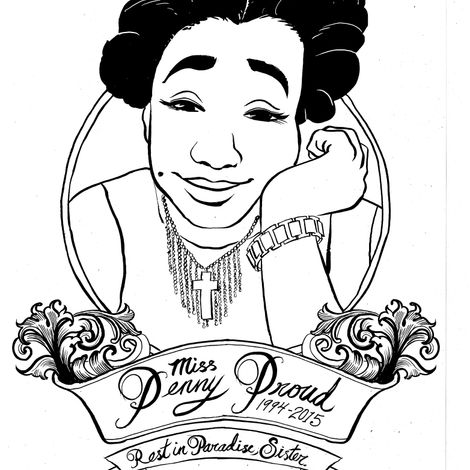 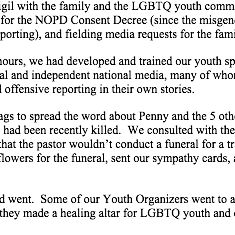 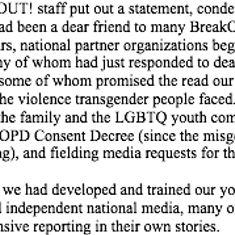 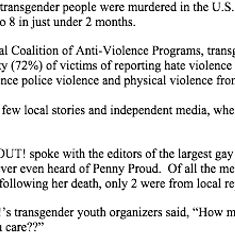 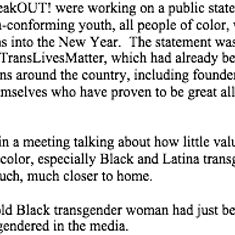 BreakOUT! was working on a public statement after 6 transgender and gender non-conforming people of color were murdered in the U.S. less than two months into the New Year. The statement was to launch our social media campaign, #BlackTransLivesMatter, which had already been picked up by other social justice organizations around the country, including queer founders of #BlackLivesMatter. We were wrapping up a meeting about how little value is placed on the lives of Black and Latina transgender women when the issue suddenly hit much, much closer to home. Penny Proud, a 21 year old Black transgender woman had just been found dead in New Orleans and already misgendered in the media. In less than 24 hours, BreakOUT! had a response plan in place. We held a vigil in the community, contacted federal monitors for the NOPD Consent Decree (since the misgendering of Penny was due to poor police reporting), supported our LGBTQ youth members and Penny's family, and fielded several media requests. And then…two more transgender people were murdered in the U.S. Then, another- raising the death toll to 8 in just under 2 months. According the National Coalition of Anti-Violence Programs, transgender women of color were the majority (72%) of victims of reporting hate violence in 2013 and 7x more likely to experience police violence and physical violence from police. And yet, aside from a few local stories and independent media reporting, where is the national outcry? Of all the media requests BreakOUT! received following her death, only 2 were from local reporters. In fact, just last week, BreakOUT! spoke with the editors of the largest gay newspaper in New Orleans; they had never heard of Penny Proud. As one of BreakOUT!’s trans youth organizers said, “How many more of us will have to die??” BreakOUT!'s solution? Make our own media. Develop our own message. Make it so big (nearly 14 feet high, in fact), we can't be ignored.