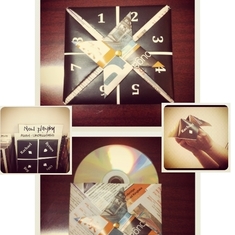 What if one grant could kick start an ongoing cycle of music projects and music grants? What if $1000 was all that was needed to create 10 new grants... or even more! Introducing “The Grantmaker Jukebox,” an innovative concept in fundraising for musicians.

I’m seeking a grant of $1000 to kick start a cycle of new grants for original music projects in Melbourne. The cycle begins with the recording of my debut album “72 Cents”.(1) This recording project needs $1000 to be completed. Once this recording has been done I plan to launch the album and raise another $1000 for a BRAND NEW GRANT, for another emerging artist. The new grant will be called “The Grantmaker Jukebox Baby Grant (Second Generation).” I’m confident I can raise at least $1000 after making over $6000 in profit from my EP.

When I launch my album musicians will be invited to apply for the new grant on the provision that, if they are successful in being awarded the grant, they too follow the Grantmaker model. In other words, they must pledge to use the grant for a music project, then launch it as part of a fundraising campaign for a brand new $1000 grant; “The Grantmaker Jukebox Baby Grant (Third Generation).” The idea is that this will create an ongoing chain of music projects and grants. Each new recipient must make the same pledge to raise money for a new grant as part of their project launch.

(1) In 2010/11 I was awarded a music project residency by the Dunmoochin Foundation to create new original music. There I recorded a debut 6 track EP as well as writing new music for a full length album. Often described as "folka-dot-pop" or "Joni Mitchell-esque", my new material has been well received by my live audiences, band bookers and the Dunmoochin Foundation community. “72 Cents” will be an album of vintage pop inspired songs with lyrics relevant today. You can read more about the album on the Grantmaker Jukebox project website www.thegrantmakerjukebox.weebly.com/the-album.html