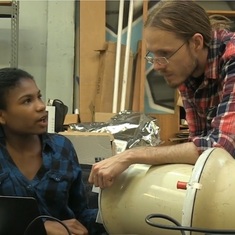 We've been using these to establish free internet at People's Park, first using an off-the-shelf 4G wifi hotspot in a waterproof pack and later using a router running open source software with a faster 4G modem and better antennas. These solutions were built out of equipment we had on hand and proved to be inadequate in their wifi coverage and bandwidth, as well as having to be taken back and recharged every night (or having their batteries swapped).

We now want to build a fully solar-powered node that can be mounted on a pole and run 24/7 with enough 4G bandwidth and wifi range that it can meet the people's needs, providing 50-100 Mbits/s to dozens of devices.

After an initial testing period at People's Park we plan to mount more of these free internet nodes at homeless encampments around the bay area. We've been talking to the "Here and There" camp at Stanford and Shattuck, which already has solar and batteries and people keeping watch to ensure the gear isn't stolen. For other camps with less infrastructure we hope to mount our nodes high up on light poles.

The FCC has recently established federal maximum pricing for pole-mounted equipment (in anticipation of 5G roll-out) which has greatly reduced the cost (from ~3k to closer to $300 per year per pole), so we've begun talking to the city of Oakland about getting permission to mount more of these nodes on city-owned light poles, and plan to do the same for other cities, with Berkeley, Richmond and SF next on our list.